On long winter nights the locals told stories of marvellous beings, beautiful fairies, who shed gold dust from their golden blonde hair into the Danube. With a little skill the glittering flakes of gold could be gathered by anyone. Although the fairies left Csallóköz, they left the gold here for us.

I talked with geologist Lajos Tuba, the head of the Regional Development Agency of Somorja, about the Danube’s gold and the secrets of panning for gold.

Folk tradition believes that the Danube’s gold comes from the fairies.  In reality, how did the precious metal get into the river?

In the same way as the other pebbles or sand, they were ground down and weathered.  The gold comes from the distant mountainous catchment areas of the river, mainly from the High Tauern mountains in Austria.  The streams that run down from the mountain weather the gold streaks and the rare metal wanders through several smaller rivers and ends up in Europe’s second longest river. The further the distance from the source of gold to the place where it is collected, the smaller the particles that can be found on the sand on the shore. While directly next to the gold vein, there are gold nuggets millimetres or even centimetres in size, in Csallóköz generally the gold is only up to 0.3 mm in size, so-called gold flakes or gold dust.

What are the traditions of panning for gold in our region?

The Celts panned for gold from the Danube’s sand; they used it to make coins.  Their knowledge was passed down to the people who live here.  Thus, our ancestors also drew from their traditions.  Several documents survive from the Árpád era [Árpád dynasty of kings] that regulated panning for gold.  The panned gold, or gold nuggets or gold dust could not be marketed just anywhere, only in designated areas.  In addition, in the Middle Ages the gold panners also had to turn in the magnetite that accompanied the gold—called the shadow of the gold in folklore.  These small particles of black metal were used to sprinkle on medieval documents and to dry up the ink. Allegedly, the gold dust still glitters on documents written in Somorja and kept in the archives of Sellye.  The gold panners had special legal rights, they could not be serfs, as this would prevent them from wandering in search of gold.  The gold panners of Csallóköz often took to the road so as to fill their purses.  They carried their canoes all the way to Passau, but they did not disdain the southward direction. Thus, contemporaries must have met these fortune hunters from the Golden Garden as far as Mohács.

The people of Csallóköz were always famous for their inventiveness.  What tricks did they use to exploit the Danube’s gold?

The gold panner first scraped the gravel or sand with the help of a shovel burned black and if there were enough particles that glittered yellow in the dark utensil, he set to work.  He set up his gold-panning bench, which was like a slightly tilted table.  On one part was a sieve on which the gold panner constantly shovelled the sand. Then he would pour the water on the sand or gravel with the help of a 3-5 litre tin can, called the meringülő or ladle.  The sloping part of the bench was covered with baize, which would catch the gold and iron dust and let the superfluous material run down when the water was poured on it.  Gold was extracted from the particles with the help of mercury.  Mercury enclosed the gold and from their reaction an amalgam known to dentists was obtained.  (This process is called foncsoritás.) Then the gold panner would make a fire and with a spoon that burned gold make the mercury evaporate.  This process was not without its dangers, as mercury is destructive to health.  By breathing in the mercury vapour the gold panner could lose his hair or in the worst case his life.  After the mercury evaporated, however, the gold panner would be the proud owner of a little gold nugget.

Is there gold now too in the Danube’s alluvium?

Industrial trials were made in our region in the 20’s and 30’s on both sides of the border, in which they tried to measure the amount of gold in the Danube.  Using crampons they dug up the sand and gravel and filtered the water. Local gold panners were hired for this work.  We learned from the reports that they did find gold, indeed there was news of real gold bricks. Nevertheless, it turned out that exploiting the Danube’s gold was not economic for either country. Our forefathers knew this well. A fragment of a poem tells of the material condition of the local gold panners.  ”The hunter tires himself out, the fishermen is rarely dry, the gold panner is always in rags…”

The construction of the Danube’s barrages has greatly reduced the alluvium brought to our land by the river.  Even today, however, gold panners can be found who pan for gold during low tide to greater or lesser success.  They do not do this for a living, but rather pursue this ancient trade out of love of adventure or as a hobby. 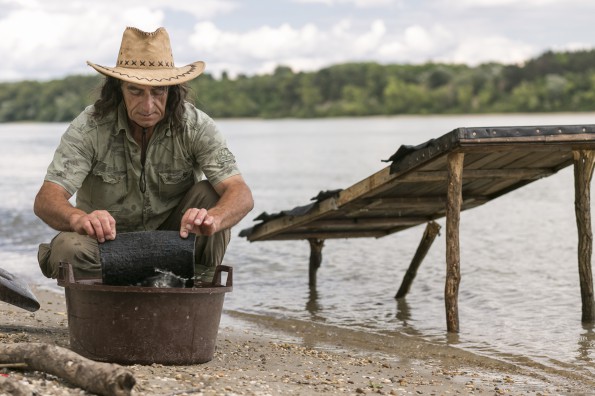 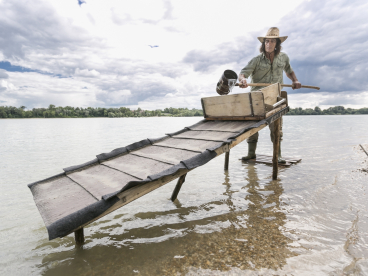 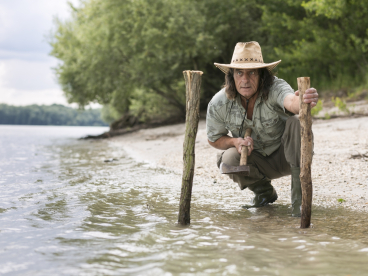 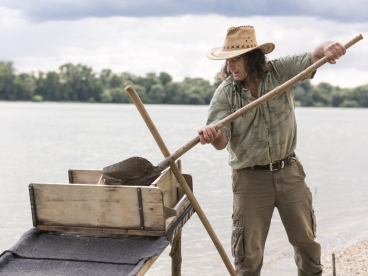 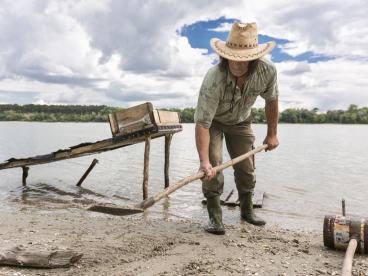 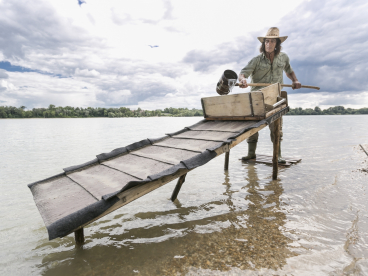