The bread of Rye Island

“Give us this day our daily bread.”  It is seven o’clock in the morning by the time we reach the Felsőpatony bakery.  We come with a whole team, the cook, the photographer and the journalist to discover the secret of the famously delicious bread of Csallóköz. The baker just shakes his head, after all, they are done. We are too late. Truly! It was cold all week, below zero, which slowed down the leavening (that is why agreed on seven).  But it was warmer today, so bang! The dough rose. So now we have dough measured out in baskets, ready for baking. We can watch them being shoved into the oven on long oven-peels. We were outsmarted by the damned weather.

”Come back in the evening or at night,” says the baker, while the world turns with me180 degrees.  The baker does not make a big deal of it.  He virtually vibrates together with the thermometer. He knows what cold weather, hot weather means and the wind that draws the heat from the oven and yet he does not complain.  He smiles at us, even though he has worked through the night.  I feel a bit ashamed, since I know that while we were sleeping, he was slaving away for us. All through the night he was making the delicious bread of Csallóköz.

”I wish people knew what went into bread making and how it is made,” begins Andrea Horváth, the owner of the Enta bakery of Felsőpatony.  We begin to talk as we inhale the aroma of the freshly made bread.  The name Horváth sounds familiar to Csallóköz ears, as the father-in-law used to bake bread in Lég.  Later, the bakery was handed down from father to son.  His son István took over the bakery of Jóka. His wife Andrea became the manager of the Felsőpatony bakery. Andrea’s bakery makes the traditional white bread of Csallóköz, while in Jóka, brioche, croissant and bread with seeds are also made.  As the oven-peel works away, I ask Andrea what is the secret of making the famous bread of Patony and Jóka. 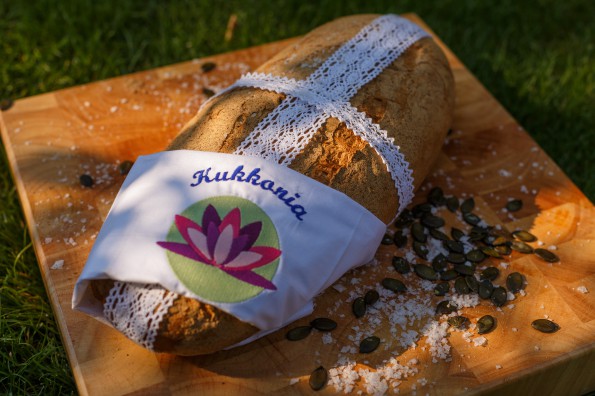 ”Housewives know well that good basic ingredients are very important.  If the yeast is not good quality, let’s say, the brioche does not rise. Our bread takes time to make, for we bake the classical, old-fashioned ”Grandma’s” bread. We do not use any ingredients that accelerate the rising. That’s why everything takes longer.  We take the bread out six hours after putting the flour in the kneading vat.

The oven is an old-fashioned two-tier beehive oven, which is no longer fueled by burning wood, but by gas.  The leavening of the dough and its preparation is by a traditional process.

The leavening of the yeast takes three hours, the rising of the dough another hour, then we shape it and it rises some more. Finally it takes 35 to 45 minutes to bake.  The six hours can be shortened by kneading the dough immediately, but you have to use artificial yeast, which, although it is not damaging to health, its taste is not like dough that has been leavened for three to four hours,” Andrea tells us, while we notice that every loaf of bread looks different.  Truly, these loaves are not like the bread churned out by factories, they are not all the same. Truly artisanal bread. It is apparent that gentle human hands made every loaf of this bread.

Bread baking (as we learned to our chagrin) is greatly influenced by the weather.  When it is cold, the bread takes longer to rise.  ”As the baker enters the shop, the first thing he or she notices is the temperature. That is the most important thing. What the temperature is in the stock-room, what is the humidity, the oven temperature, how much it has to be heated up,” says Andrea.

She confesses that a lot depends on your mood when you bake bread. You have to love making bread and know all the tricks of the trade. If need be, she helps with the ”production.” She puts the dough into the vat, measures and weighs, then puts it into the basket.  Then she stays up all night.  “We inherited the bakery, but we rose to this inheritance. I am officially a baker now.  It is very important that I know everything about the profession, since every phase of making bread has meaning. Even that little time counts when we take the dough out of the vat and put it on the scales, then we let it stand a bit. If we are in a hurry and we cut the time or slow down, the bread will collapse.

Andrea and her husband, István, know that they put a bread to market that no one else makes. In the bakeries of Felsőpatony and Jóka they continue to bake the traditional white bread of Csallóköz that is famous far afield. Aside from the kneading, everything is done by hand. In Jóka they bake whole grain bread. They make sandwich bread from crescent roll dough and they make salty crescent rolls as well as pastries there, classic braided brioche, horseshoe brioche, sprinkled with poppy seeds and filled brioche (poppy seed rolls and nut rolls).

While in Patony, because of the steady temperature, you do not need a special room for leavening, in Jóka there is enough room for it. In fact, the oven is bigger and they even package the bread. It is interesting, they all use the same procedure in making bread and yet they all taste different.  Andrea says laughing, that is OK.  The aromas, the atmosphere, the temperatures, the space in the bakery of Jóka are different. And since we are talking about it, Andrea takes us to the Jóka bakery.

“In Gúta it is thought that the bread is well kneaded when the water is dripping from the beam, that is when the woman’s forehead is sweating.” (József Liszka: Ágas-bogas fa) [Arborescent tree, p. 115]

As we get there, I ask Andrea about the baker’s profession. “This is a very hard and exhausting trade. Bakers work 12 to 14 hours. It is no wonder that fewer and fewer people want to learn the trade. Nobody wants to do complicated work nowadays and so nobody wants to bake bread. Bakers do not get the respect they used to and the market has changed. Because of the price policies of the chains, the smaller bakeries have been pushed to the edge. And they do not want to pay the extra work, which is entailed by making bread without accelerators and additives. ”

Andrea thinks that yes, of course, they should get into the larger chains.  But there they have to fulfil criteria that the small bakeries cannot (they cannot suffer the losses, they cannot give away for pennies the bread they baked with the sweat of their brow).  And customers are led astray by the bread baked by the larger chains. The showy bakeries entice the customers by the aromas and puffed-up buns. In the hypermarkets you can find the fresh crisp still warm bread next to the meat counter.  (And we forget, hello, that it is frozen bread that they have baked.) The customers save time by buying the bread there instead of going to the baker’s. Everything is in one place, except that you do not get artisanal bread. The campaign really started against white bread. But lately every kind of bread has been branded. Yet it is not bread or meat that makes people sick, but bad meat and bad grain. Beginning in December, you have to indicate the calories of every packaged bread. I think that customers should take the opportunity to see the caloric values of white and brown bread. Many people will be surprised that it is not the white bread that has the highest number of calories.

I agree with Andrea.  Afterwards, they make us believe — and sell us — a lot of fake things.  And if we are careful shoppers we can buy the food industry’s productions “free of everything.” Whereas we generally live in good regions, where agriculture should flourish, where we should be able to produce quality grains and make good bread. For Csallóköz stomachs are not used to fibrous bread and whole grain bread, but to white flour and white bread. We should understand that we are not here in vain, it was not by accident that our forebears ate cakes made from white flour. Our ancestors grew grain, then made cakes, later sourdough bread.  Not so long ago, women kneaded the dough with the sweat pouring down their brows, then took it to the village bakery who baked it in his oven. The Golden Garden is famous for this too…”Another outstanding specialty of this part of Csallóköz, to which we draw your attention, is their bread-baking ovens. (…).  You can see conical edifices often as high as houses, made of mud, at a distance from the houses, most often in the gardens and  at times surrounded by lower walls made from similar material,” Arnold Ippolyi in his book, Útiképek of Csallóköz [Photos of Csallóköz] in which he tells of the bread baking ovens of Csallóköz.  (Ipolyi, 1858, 4 sz. 40.)

”The first step is making the yeast,” says Andrea. ”That is what gives the bread a bread taste.  For this we need a mother yeast, this is a ball of dough weighing about a kilogramme from the previous batch. We salvage the taste and bacteria. This does not sound very good, but we need the so-called healthful bacteria and lactic acid.” 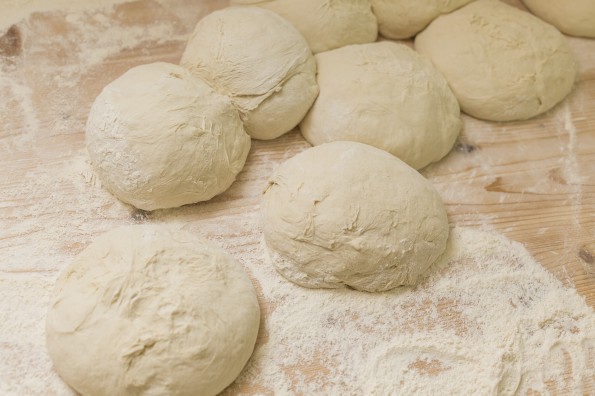 As I look at this dough, Andrea encourages me to taste it. As I taste it, I am thinking out loud. As there is always a last bit saved, the chain is never broken. Andrea retorts that it should never be broken.

”The ingredients that make up bread is flour, water, yeast, and salt. We mix the yeast in the water, flour and yeast from which a pudding-like dough is made. This takes three hours to rise.  In the first hour it rises to the height of the vat, then subsides. Three hours later we knead it, then add salt.  Why there is so much salt added to the dough in the process, for it would ruin the husk of the yeast’s cells. Then it rests for another hour.

When the dough is ready, they measure out the pieces by hand, put them in the vats, shape them, and place them in baskets, which then rest for a half hour. Then they are put into the hot oven.”

We humidify the oven, when it reaches 270 °C, we put them in. Before and after we smear the loaves with water, so they glisten and keep their moisture.

Then the enticing loaves can set off on their way.  Why are the bread and pastries of Csallóköz so famous?  Because they are made from good ingredients.  Everything is local, everything is from home, everything is made from the basic ingredients of Csallóköz. For example, the flour of Gúta has no peer. It wins every contest. “But it carries the seeds of starting anew //it has renewed force for the battle ahead// It has life in it.”  (Sándor Reményik: Daily Bread)

Caption:  “I order you in the strictest terms to never put anything on my table without adding bread.” That is what the king said in the folk tale, for he considered bread to be the most delicious food. 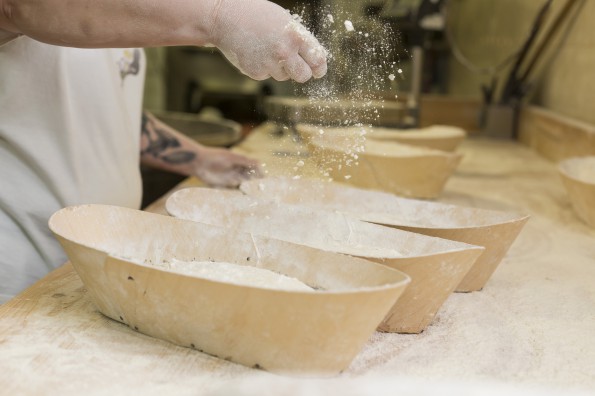