The land surrounded by two protective branches of the Danube with its marshes, waters rich in fish and rank pastures provided shelter even for the people of the Bronze Age. Based on archaeological records, there were different nations inhabiting the largest river island of Europe until around the end of the 9th century, when Hungarian tribes occuppied it, and after the abolishment of Great Moravia, gradually populated the whole land of Kukkónia.

Great Rye Island became part of the Kingdom of Saint Stephen, where several settlements had been established under the protection of castles of Bratislava (Hun: Pozsony) and Komárno (Hun: Komárom).  A trading route was established, crossing the countryside between the two endpoints of Great Rye Island. State administration was set up following Stephen I’s orders. The royal castles were led by counts, called “ispán”, who, in the king‘s absence, represented the king‘s authority. The counties, including the lands belonging to the royal fortresses, were called “várispánság”. These counties formed the first administrative units of the Hungarian Kingdom. The territory of Great Rye Island was divided into three such counties: the counties of Bratislava, Komárno and Győr.

On the road of the warriors: from the Mongol invasion to the war of independence

Great Rye Island, called also “Kukkónia” or “Golden Garden” (“Aranykert” in Hungarian) had an important role in defending the kingdom: the guards of internal borders often surprised and thus discouraged the enemy with their sudden outbursts from the swamps and unexpected retreats. Batu Khan’s furious Mongol warriors did not dare to step in the swampy areas of the marshlands of Great Rye Island. This was, however, not true for the Turks, who persistently raided and plundered the locals. Although Kukkónia belonged under Habsburg rule then, the waters and lands of the Golden Garden provided food not only for the imperial army stationed here, for the city of Bratislava, but also for the Emperor of Vienna and the Pasha of Esztergom, who savoured local game and sturgeon too. No wonder, that as a result of this demand, quite a few settlements were desolated in those times.

The 17th century was marked with Turkish presence and anti-Habsburg uprisings: the troops of Bocskai, Bethlen, later Thököly and finally Francis II. Rákóczi were expecting the inhabitants of the Golden Garden to provide food and billet.  The peaceful and tranquil times following the war of independence led by Rákóczi were shattered by Napoleon’s plans to conquer the world.

The events of 1848 enheartened the inhabitants of Great Rye Island. They readily joined the revolutionists. The Castle of Komárno played a key role, since its enduring resistance to the sieges fuelled the hopes of the locals.

The strange twists of the 20th century

People of Great Rye Island were compelled to change citizenship in the last century several times, without even crossing the borders of their native villages. Men in their best years fought for their homeland on distant fronts during World War I. Nevertheless, their homeland was broken up during the negotiations aimed at settling the war. Hence, the inhabitants of this area, bordered by the Danube and the Little Danube, became citizens of Czechoslovakia.

The separation from the fatherland left its mark on the development of the region in the period between the two world wars: economic and intellectual life, bound to Budapest, faced a blind alley. The locals welcomed the Vienna treaty in 1938, which attached their native land to the Hungarian Kingdom again.

Many fell victim during the Second World War too: wives and children waited for their husbands and fathers in vain. Although the war ended in May 1945, on Great Rye Island, once more attached to Czechoslovakia, this did not bring relief of suffering. According to the Government Program of Košice, the Hungarians living here were disenfranchised, persecuted and forcefully relocated to Hungary. After the Communist party seized power in 1948, the instigation of national animosities was replaced by class warfare. Since the atmosphere had calmed down, Hungarian schools could be opened again, Hungarian newspapers could be published and a cultural association of Hungarians, “Csemadok” was established.

Inhabitants of Great Rye Island actively took part also in the political transition in 1989: the Independent Hungarian Initiative (Hun abbrev: FMK), which drew the locals’ attention towards the events in Prague, was formed mainly from intellectuals living on Great Rye Island. In the years following the change of the regime, Czechoslovakia was divided into two independent states, and the Slovak Republic, which included Great Rye Island, was established on January 1, 1993. 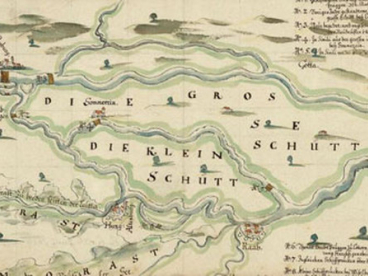